This spring's official Arkemi study trip went to... *drum roll*... Iran. Birthplace of such important things as the solar calendar, backgammon, Persian rugs and of course: our friend and CEO Kayrokh Moattar. 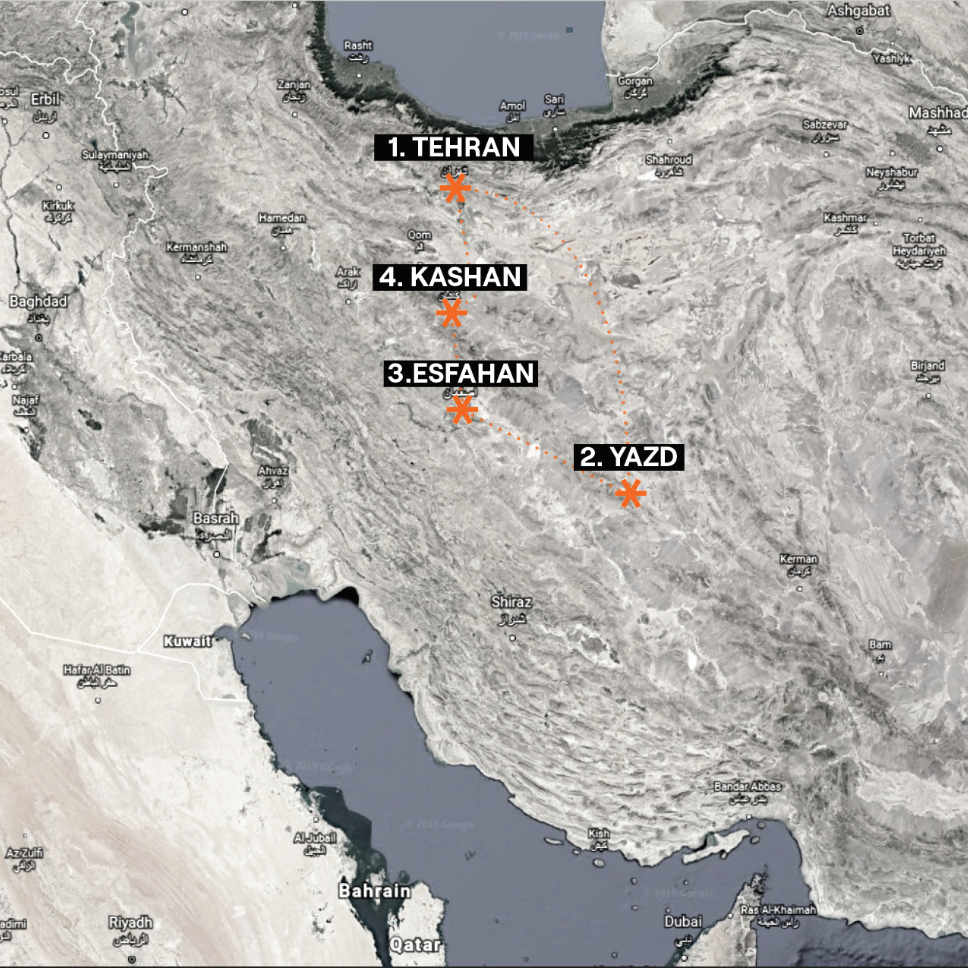 And what a trip we had! We started our journey on April 20th by flying to the capital and mega city of Tehran."Flying!?" you say. "But what about the environment?". Yes... it is not something that we are proud of (#flight shame) but in order to fit a trip like this in to our schedule we weren't left with any other options. By taking this decision we effectively blew our personal yearly maximum CO2e emission more than four times over, ONLY counting the emissions from the actual flight.

We did climate compensate for the trip by using the services of klimatkompensera.se, putting some money in to a project giving families in developing countries access to efficient and safe stoves. However admirable this project might be, as with all climate compensation it is not nearly as efficient as actually lowering your personal, your businesses' and the (Western) World's CO2 foot print in the strive to reach the global goals for sustainability described by the UN.

Moving on back to the main subject of this article. Iran is a huge country (about four times the size of Sweden/Spain/California) and even though we stayed there for two weeks we could only enjoy a tiny part of it. This trip we decided to focus on the dry and mountainous/high-plateau regions of Tehran, Esfahan and Yazd and the cities that bear the same names. 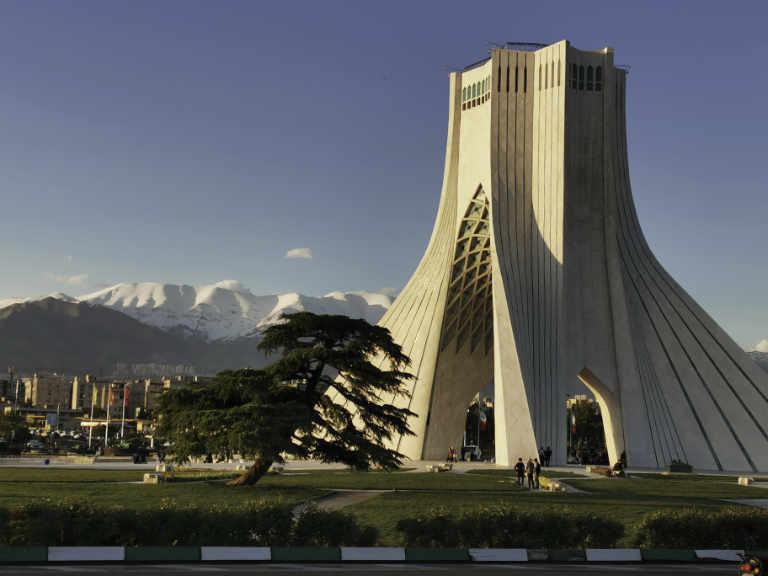 Tehran is, as already mentioned, a buzzing megalopolis of about 15 million people. It is the political, cultural and financial center of Iran and its capital since 1795 AD. The city's rapid expansion during the 20th century has resulted in a city where the car is king, conscious urban planning is futile/inexistent and only a few of its historical parts, monuments and buildings still are distinguishable. The Alborz mountain range constituting the city's northern border is, however, as mighty as ever. In late April its peaks where still white-capped, and alpine skiing possible for another couple of weeks.

The Azadi Tower, built in 1971 as a celebration of 2 500 years of Persian monarchy (that came to and end with the 1979 revolution only 8 years later, is another of the city's preserved and impressive landmarks. It is also (together with the Sydney Opera House) the first building to be constructed with the aid of computers. According to its architect, Hossein Amanat, its sleek body of white marble was designed to represent how Iran "should be moving towards a higher level". 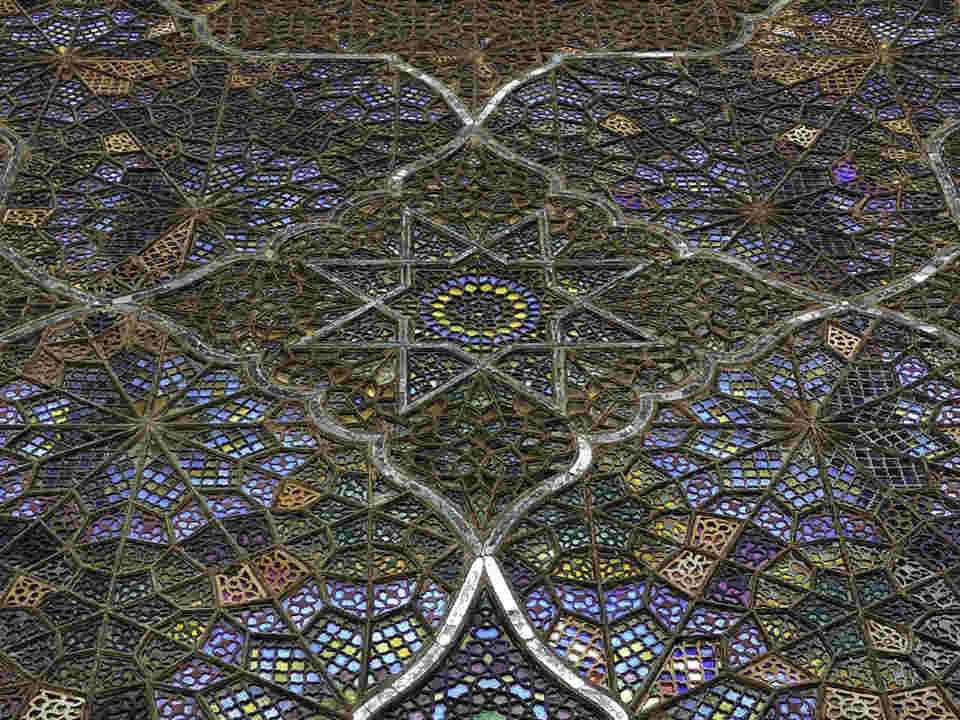 In the central parts of the city we find the Qajar (19th century) and Pahlavi (20th century) dynasties' enormous palace complexes. Room after room, each more magnificent than the previous one. In the Golestan Palace, seat of the Qajar royal family, we were introduced to many local traditional forms of handicraft and architectural detailing.

Gerechini is for example a method of creating geometrical lattice works out of wood and stained glass, completely without the aid of nails or adhesives, used for constructing marvellous windows, screens etc. 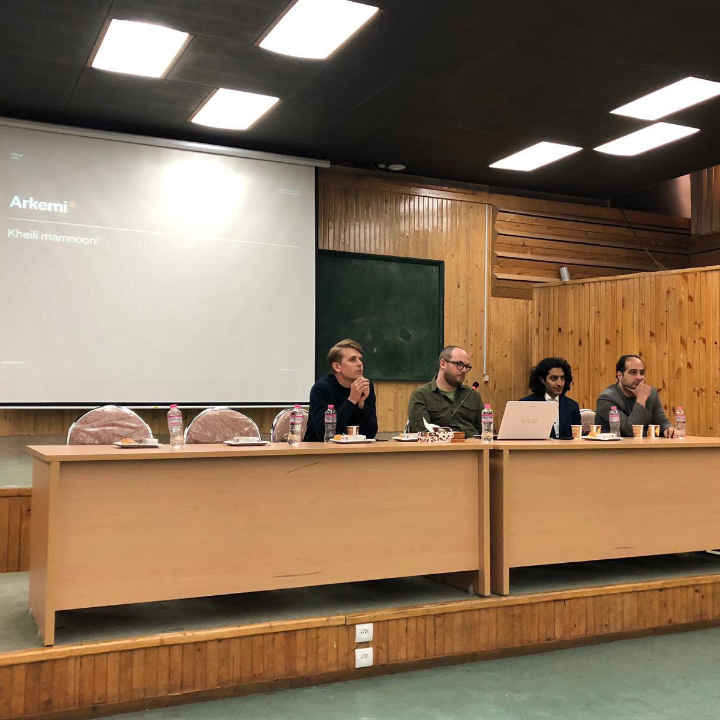 During our stay in Tehran we also had the great honor of visiting and holding a lecture at Kayrokh's Alma Mater: Shahid Beheshti University, School of Architecture and Urban Planning.

The lecture, held together with our good friend and architect Ali Mohammadi, covered the very broad themes of Nordic architectural history, its practice and how Arkemi works with sustainability and BIM. Big thanks to students and staff for listening and for staying curious!

The role of the architect is very different in Iran compared to Sweden. Nextoffice is a proof of this. When visiting two of their residential projects, both in their final phase of construction we learnt that they always have at least one of their architects leading the work on-site. Together with a high-income target group and low cost of labor and exclusive materials (especially marble) the built result is precisely and exquisitely detailed. In one of their projects even the mechanical room had natural stone flooring with perfectly aligned tiles and chamfered corners. 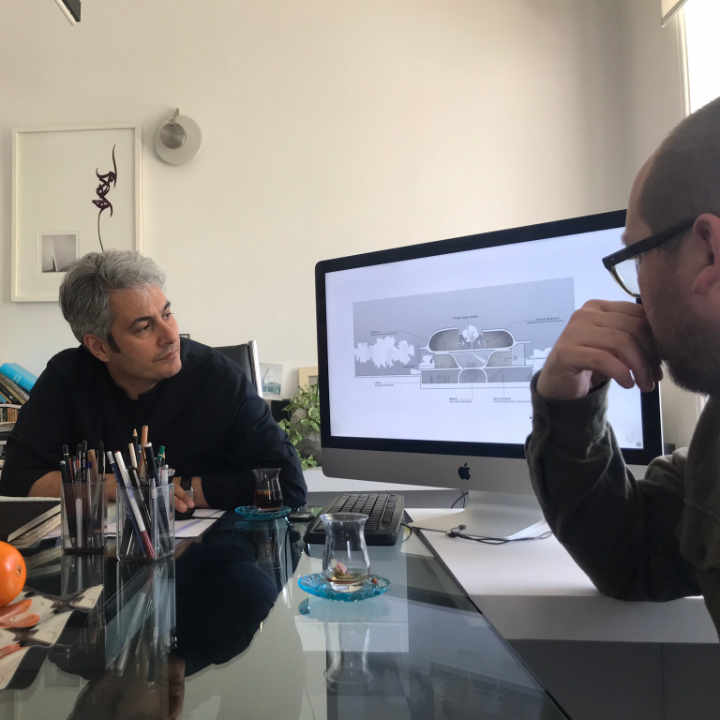 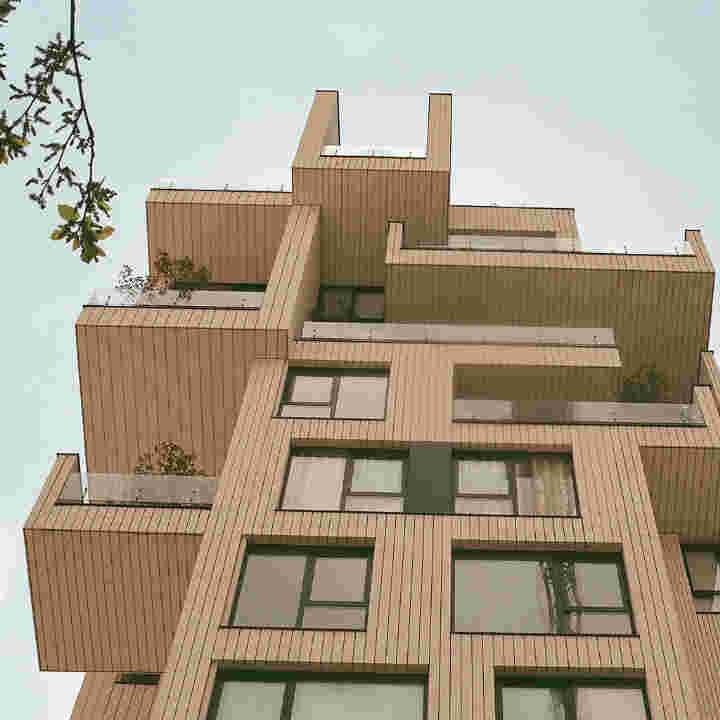 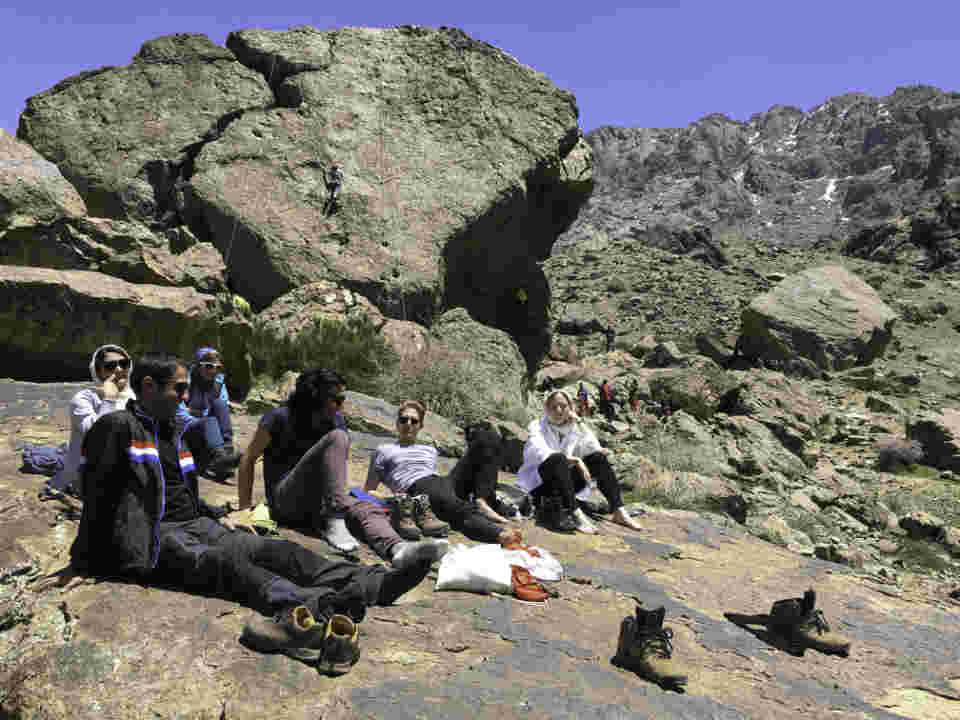 Tehran is an exciting cosmopolitan city that offers an abundance of things to do outside the realm of architecture. In our limited time we tried to do experience as much as possible.Hiking in the previously mentioned Alborz mountains is a definite "must do" as all forms of mountaineering is a favorite past-time for the locals. We started our day-trip in Darband, a former mountain village turned into a recreational suburb full of restaurants and vendors straddling steep cliffs and water falls. Very quickly the terrain gets rougher, the nature wilder and you can enjoy wonderful views over both the city and the mountains.

Another "must do" is to try out the local cuisine. Vegetarians/vegans be warned: the Persian cuisine is rather meat-heavy. A memorable experience for all of us was when we during a late night walk bumped into a pop-up Jigaraki, a charcoal grill serving Persian kebab (meat, intestines, tripe and veggies on a skewer) to hungry passers-by. The atmosphere was almost as amazing as the food! 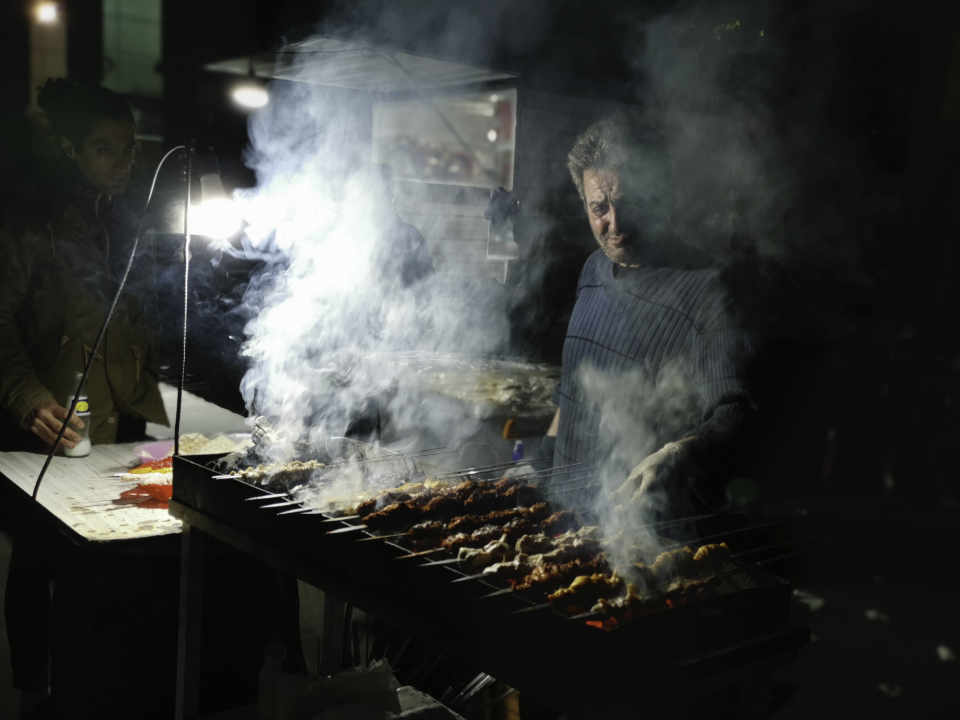 Arkemi has received a generous grant from Stockholm's Building Association (Stockholms Byggnadsförening) for a project which aims to simplify the early stages of designing, dimensioning and budgeting Cross Laminated Timber (CLT) buildings.